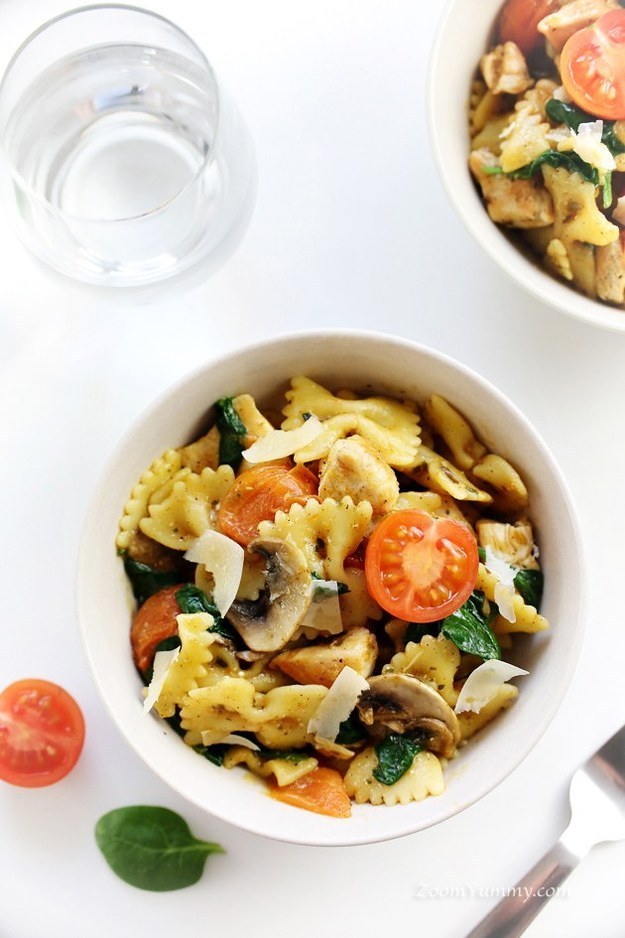 Step One:
"In a large pot, melt the butter over medium heat. Continue to cook until it bubbles and turns a caramel brown color."

Step Two:
"Add the pasta to the pot and let cook for about 1 minute, stirring frequently. Add the chicken broth to the pot and stir. Season with ¼ tsp salt, ¾ tsp red paprika powder, 1 tsp dried garlic, ½ tsp curry powder, ¼ tsp cayenne pepper, 1 tsp dried parsley and 1 tsp dried chives. Stir. Simmer until all liquid is absorbed by the pasta, stirring occasionally. If all liquid is gone before your pasta is done, add more water and continue to simmer."

Step Three:
"While the pasta is simmering, in a skillet, add 1 tbsp olive oil and place over medium to high heat."

Step Four:
"Add the chicken to the skillet, season with about ¾ tsp salt and ¼ tsp ground black pepper. Cook until done. Remove the chicken from the skillet into a separate bowl. Cover with foil."

Step Seven:
"Once all of the chicken broth has been absorbed into the pasta, toss the mushroom-tomato-spinach mixture and the chicken into the pot with the pasta. Stir well to combine. Sprinkle with Parmesan cheese and serve."