Step One:
"With a blender or a hand blender, puree peaches. Add, honey and yogurt and puree more."

Step Two:
"Pour contents into ice cream maker and turn on for 25 to 30 minutes, until mixture is stiff and bunching into the blades."

Step Three:
"Remove all frozen yogurt from ice cream maker and store it in another container. Freeze for an additional 2 hours." Step Two: "Refrigerate 2 hours or until firm enough to handle."

Step Three: "Roll into 1-inch balls and then coat in paprika."

Step Four: "Make indents in the side of each one with a knife to make a pumpkin shape (refrigerate longer if needed before shaping with a knife)."

Thank you, Gourmet Girls for the recipe! 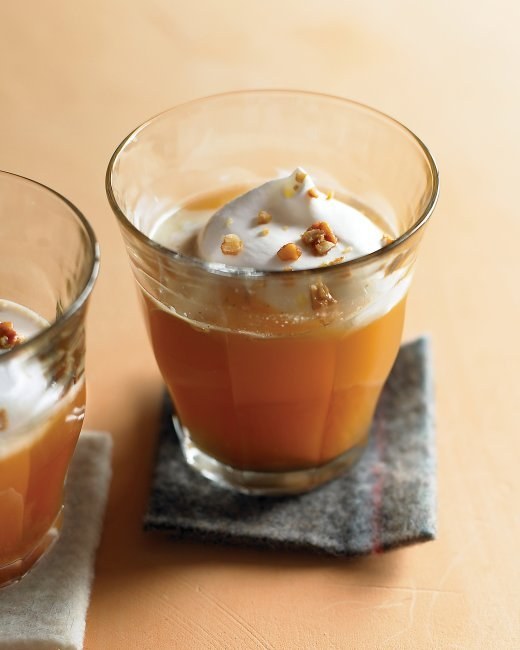 Step Three: "Divide among 6 mugs or heatproof glasses, and top each with a dollop of whipped cream and a few honeyed walnuts."

Thanks, Martha Stewart for this recipe! Step Three: "Add eggs and milk and beat 1 to 2 minutes, or until thoroughly mixed."

Step Four: "Pour half of batter into a prepared loaf pan. Spoon chilies and 2/3 cup of cheese evenly over batter. Pour remaining batter over cheese and top with remaining 1/3 cup cheese."

Thanks Mr. Food for this recipe!

Snack Like a Southerner: No Bake Pumpkin Cheesecake Bars

Step One:
"Throw those graham crackers (about one sleeve’s worth) into a plastic bag, and crush them."

Step Two:
"In a large bowl, mix together the crushed grahams crackers, 2 tablespoons of sugar and a half stick of melted butter with a fork."

Step Three:
"Press the buttery graham cracker crumble into some sort of baking dish. I used an 11 x 7 inch dish, but you could honestly use just about anything— even a pie or cake tin would be fine."

Step Four:
"In a bowl, mix together the cream cheese, pumpkin purée, sugar, vanilla and pumpkin spice until well-combined."

Step Five:
"Then, fold the tub of Cool Whip into the mixture and mix until combined."

Step Six:
"Dissolve your envelope of gelatin into ½ cup of hot water (you could steal some from your roommate’s Keurig) then mix into the cheesecake filling."

Step Seven:
"7. Spoon the cheesecake filling over the graham cracker crust and leave in the fridge for at least 3 hours before cutting the dessert into bars. Enjoy!"

Thank you Matthew Blair for this awesome recipe! In a large pot over medium heat, heat oil and cook bacon unitl crisp. Once cooked, remove from the pan and crumble. Dump crumbles back in pan.

Add onion. Saute in pan for about five minutes.

Add garlic to onions and bacon. Cook garlic for a few minutes before adding the collard greens. Fry until greens wilt.

Pour in chicken broth, salt, pepper, and red pepper flakes. Stir. Reduce heat to low, cover, and simmer for 45 minutes, or until greens are tender.

Step One:
"The day before making the stuffing, bake the cornbread: Preheat the oven to 450 degrees F. Melt 2 tablespoons shortening in a 9-inch cast-iron skillet over medium heat. Meanwhile, combine the cornmeal, flour, baking powder, salt and baking soda in a large mixing bowl. In a separate bowl, whisk the buttermilk, milk and egg until combined. Slowly incorporate the wet ingredients into the dry, stirring until combined. Melt the remaining 1/4 cup shortening in the microwave and add to the batter, stirring constantly. Pour the batter into the hot skillet, smoothing the surface with a rubber spatula. Bake until golden brown, 20 to 25 minutes. Let the cornbread cool in the skillet, then cut into 1-inch cubes."

Step Two:
"Spread the cornbread and French bread cubes on 2 baking sheets and let dry at room temperature, uncovered, until totally crisp, about 24 hours. Transfer to a large bowl and toss to mix them up a bit."

Step Three:
"Make the stuffing: Preheat the oven to 350 degrees F. Melt the butter in a large skillet or Dutch oven over medium heat. Add the celery, carrots and onion and cook until the onion is almost translucent, about 6 minutes. Add the chicken broth and bring to a boil. Reduce the heat to low and add the rosemary, thyme, sage and turmeric. Gradually ladle the broth mixture into the bowl with the bread, tossing gently. Taste as you go and add salt carefully. If the mixture is not moist enough, add a bit more chicken broth. Stir in the parsley." Step One:
"Place the cranberries in a colander and rinse them. Pick out and discard any damaged or bruised cranberries. Put the water and sugar in a medium saucepan on high heat and bring to a boil. Stir to dissolve the sugar."

Step Three:
"Once the cranberries have burst you can leave the cranberry sauce as is, or dress it up with the other ingredients--pecans, nutmeg, blueberries, orange zest, cinnamon or allspice."

Step Four:
"Remove the pot from the heat. Let cool completely at room temperature, then transfer to a bowl to chill in the refrigerator. Note that the cranberry sauce will continue to thicken as it cools."